By plane – Paris is served by three international airports – for more information, including arrival/departure times, check the official sites.
Charles de Gaulle International Airport (Roissy) The major hub airport to the north-east of the city.

It’s notoriously confusing, so allow plenty of time for transfers. There are three terminals: Terminal 1, Terminal 2 (which is huge and subdivided into 2A through 2G), and Terminal 3 (formerly T9). The newest exception is terminal 2G which is a separate building and is only reachable via France business and first class travelers. The members of the Air France and cooperating frequent flyer programs may gain access with sufficient status. There is a possibility that some lounges may grant access to travelers on their flights for a fee. If you consider paying for access to the lounge, inquire when checking in for your departure. If you must have a shower and your frequent flyer status (and charm) are insufficient to gain entry to a lounge, the airport hotels generally have rooms available. When you arrive at CDG, you should note what terminal you arrived at (2A, 2D, etc.), because when you come back to the airport to depart at the end of your trip, the RER subway train makes two stops at CDG to cover the three terminals, but there are few indications of which airlines are at which terminals. Have a close look at your air ticket to figure out which terminal you are departing from. Air France and associates leave from Terminal 2. The RER B has the airlines serviced by each terminal on a not so obvious chart posted by the door of the train. 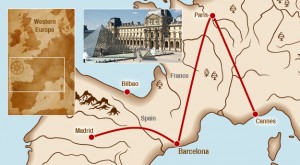 Orly International Airport This airport is southwest of the city, and served by a southern branch of the RER-B line that heads in the direction of Saint-Rémy-les-Chevreuse (not Robinson). This older international airport is used mainly by Air France for domestic departures, and international departures by European carriers. Orly is roughly 40 min from Paris via the OrlyBus, which departs from Métro Denfert-Rochereau (ligne 6); the price is €7. There are buses every 10 minutes from the Orly Sud (Platform 4) and it stops at Orly Ouest on its way to the city. Tickets can be bought at a counter near the baggage claim area or directly at the counter in Platform 4. The tickets need to be validated once on the bus. Another option is bus 285 that takes you to the Métro Villejuif – Louis Aragon(Line 7) in 15 min, but it stops on the way and is designed for commuters and not for travellers. Bus 285 costs €1.90 and runs every 10 min, stopping at airport level -1.

The Orlyval light rail connects the two terminals to each other and to the RER B line at Antony. It runs every 4-7 min and cost €9.85 for transfer to Paris, including connections to central area metro stations. The RER B from Antony runs through Paris to Aéroport Charles de Gaulle.

Beauvais (Aéroport de Beauvais Tillé) This airport, a distance north of the city, is a smaller regional airport that is used by some low-cost carriers such as Ryanair (list flights) and WizzAir. Like many small airports there is a cartel in operation in the form of the airport operated shuttle service connecting with the Métro at Porte Maillot station. Buses run even during the small hours of the morning (6AM). Buses leave 20 min after each flight arrives, and a few hours before each flight departs. Exact times can be found on the Beauvais Airport website. The journey will take about an hour in good traffic conditions, and costs €15 each way, there is no reduced price for children over the age of 2 years. Unless you hire a car this is the most realistic way to head toward Paris, hence why the airport charge the price they do.

Airline Shuttles – In addition to public transport, Air France operates shuttles between Charles de Gaulle and Paris (€15-16.5), Orly and Paris (€11.5) and between the two airports (€19). Note that if you have connecting Air France flights that land and depart from different airports, you would still generally need to fetch your luggage after landing, catch either the Air France shuttle or a taxi (readily available at all airports) to the other airport and check-in again. This altogether could take up to 2 hours particularly if traffic is at its worst. It is also common to lose time during disembarking, as passengers often need to get off at the tarmac and get on buses which will bring them to the terminal building. Be sure to have sufficient time between flights to catch your connection. Note that check-in counters usually close 30 min before the flight departs, longer if flights are international carriers.

If you arrive to CDG Airport at night you’ll need a Noctilien bus to get to the city center. The bus stops in all three terminals (in terminal 2F it will be the second level in departure section – it is very difficult to find, but it really exists). The bus leaves every 30 min after 12:30AM (see timetable). The buses you’ll need are N121 and N120; the price is €7.

By train – Paris is well connected to the rest of Europe by train. There is no central station serving Paris and the six different stations are not connected to each other. You will probably want to know in advance at which station your train is arriving, so as to better choose a hotel and plan for transport within the city.

By car – It is advised not to drive in the Paris Metro Area. It is better to drive to a suburban train station with a parking lot and then use the train to continue your trip throughout Paris. Most of Paris’ roads were created long before the invention of automobiles. Traffic inside the city tends to be heavy, especially at rush hour; driving, however, may be rather easy and efficient in the evening. Parking is also difficult. Furthermore, the medieval nature of parts of the city’s street system makes it very confusing, and traffic will almost never allow one to stop or slow down to get one’s bearings. If you are unfamiliar with the streets and still insist on driving in the city, make sure you have a navigator in the passenger seat with you.

The Studios of Pablo Picasso • Paris

Pirates of the Caribbean • Nassau, Bahamas •...

Pirates of the Caribbean • History