Home Archives The Odyssey • Mykonos • 4 • How to Get There 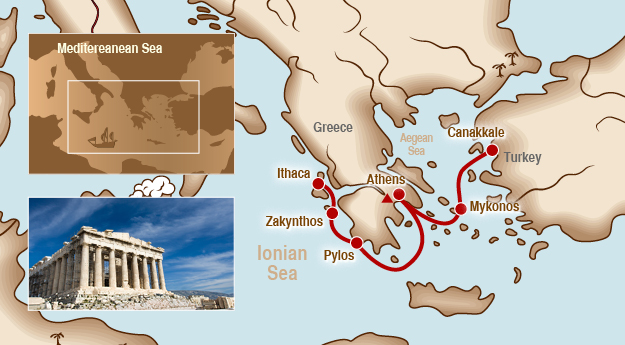 By boat – From the Greek mainland ferries and highspeed catamaran services run daily from Piraeus and Rafina. The highspeeds take half the time but cost twice as much.

The journey between the port of Piraeus (Athens) and Mykonos takes between 3h 30min and 5h 15min, depending on the type of ferry you are taking. In Piraeus all the highspeed ferries to Mykonos depart from Port Gate Ε7; the conventional ferries leave from Port Gate Ε1. Most of the ferries connecting Piraeus to Mykonos stop working by end of October and resume by April.

Many travelers probably don’t even consider Rafina a possible departure port if they are heading to one of the Cyclades, but if you are arriving at the airport of Athens you are often better off taking a ferry from Rafina than traveling to Athens and get a ferry from Piraeus. The journey between Rafina and Mykonos takes between 2h 10min and 5h 30min, depending on the type of ferry you are taking. Most of the ferries connecting Rafina to Mykonos stop working by end of October and resume by April.

Mykonos can also be reached directly from other islands in the Cyclades. More than once a day there is a boat connection from Syros,Andros, Tinos and Paros. There are daily boat connections from Naxos, Ios, Santorini and Crete. There’s a daily overnight ferry, the ‘Nissos Mykonos’, from Samos (Vathi and Karlovassi) and Ikaria. There are less frequent boat connections from Serifos, Sifnos, Kimolos, Milos, Folegandros, Sikinos, Thirassia and Anafi.

Pre-booking of ferries and highspeeds is only necessary from mid-July to late August or just before or after a Greek holiday. Beware that every year at the 15th of Augustus the island of Tinos is a goal for thousands of orthodox pilgrims. Most ferries and highspeeds from Pireaus and Rafina to Mykonos make a stop at Tinos. This means that around this period it is recommended to buy tickets well in advance. Also expect a lot of Greek tourist to visit Mykonos around the weekend of Pentacost, which is at movable dates but in 2012 will be at the 3rd and 4th of June.

Keep in mind that if you book your ticket online, you will still need to collect the ticket from a travel agency once you get to Greece.

From the old port it is a short and easy walk along the coast into town.

By cruise ship – Mykonos is a popular stop on cruise ship tours of the Greek Islands. Almost all cruise ships dock at the new port in Tourlos, though some cruise ships use the old port. If you are arriving at the new port, make use of the cruise shuttle bus to Mykonos Town. You can also take a taxi yourself, but with so many people arriving at the same time it won’t be easy to catch one. It is likely that the cruise shuttle bus will drop you off at a parking area not far from the northern bus station in Mykonos Town. It is less than a 10-minute ride. From there everything is within walking distance.

If you are arriving at the old port, you will arrive within a 10-minute walk of the heart of Mykonos Town and no bus ride will be necessary or even available.

It is easy to explore Mykonos independently. There’s no real need to book excursions. Also the recommended excursion to Delos can be booked independently (guided or unguided).

By plane – Mykonos has an airport about 4km away from the main town. There are daily flights from Athens airport (35 minutes) by Olympic Air and Aegean Airlines. During summer both Olympic Air and Aegean Airlines have daily direct flights from Thessaloniki. In high season there are also less frequent flights from Rhodes, Santorini, Crete (Heraklion) and Volos by Sky Express. During the months of July and August Astra Airlines flies from Thessaloniki.

From May till October charter airlines fly directly to Mykonos from many European airports.

At the arrival area of the airport you may find an ATM, shops, a cafetaria, public phones, a post box, an office of the Mykonos Hoteliers Association, an Olympic Air office, an Aegean Airlines office and many car rental companies. In the terminal building on the first floor there is a duty-free shop for departing passengers selling tobacco, spirits, perfumes, cosmetics, travel accessories and gift items.

Take a free and useful Mykonos Sky Map from the luggage collecting hall at the airport. This free map is also sold in shops in Mykonos Town.

From the airport to Mykonos Town – Many Mykonos hotels offer airport transfers, at rates that can be anything from free to more than a taxi. Best chance for a free transfer is when you book your room directly with the hotel. A transfer by your hotel is the easiest way to get to your hotel, so check with your hotel before arrival.

Taxis are usually waiting at the airport, at the taxi rank opposite the terminal building, but competition for them can be keen. If there is no taxi waiting you can see the sign with the phone numbers of the taxi radio office so you may call. A taxi from Mykonos airport to town costs about € 8, a few euros more if you are carrying luggage.

During high season there is an infrequent public bus service from the airport to the southern bus terminal, Fabrika, in Mykonos Town. A bus ticket costs € 1.60. The bus leaves the southern bus terminal in Mykonos Town at 12:15PM and 1.45PM, and then is scheduled to go back from the airport to Fabrika 10 minutes later. As the schedule changes every two weeks those times might change a little. It is not really worth waiting around for a bus unless it is already there. This bus service is not useful if you have to go to the (old or new) port.

The Odyssey • Mykonos • 5 • Getting Around