Arriving by plane from Bangkok – Bangkok is the hub of travel activity for Southeast Asia. You’ll be able to get anywhere you want from here. Bangkok is served by two airports: Suvarnabhumi Airport and Don Muang Airport. Suvarnabhumi Airport is used by all airlines in Thailand, except for domestic flights on Nok Air and Orient Thai, which still use the old Don Muang Airport. Both these airports are about 30 km (19 mi) from the city centre, so be prepared for a long ride to get into the city. Also allow at least three hours to connect between them, as they are far away from each other and there is heavy congestion on the roads.

Arriving by plane to Siem Reap – Siem Reap International Airport is the second largest airport in Cambodia. Its modern architecture is based on the traditional Khymer style. Its facilities are limited. There are separate terminals for international and domestic flights.

The airport is around 7 km from the town centre. Prepaid taxis cost US$7, see the prepaid booth just outside the terminal. Prepaid tuktuk rides for slightly less are also available. Thrill seeking solo travellers without much baggage can save a few dollars by opting for back of a motodop for US$2. Most hotels offer a free airport pick-up if you’ve booked in advance. 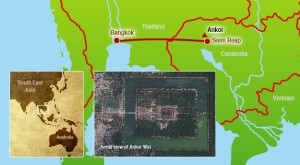 Accomodations – An inexhaustible range of sleeping options from upmarket hotels to grubby backpacker hostels, with a myriad of guest houses, boutique rooms, bungalows, concrete cells, wood huts and French villas in between, make finding a place to sleep one of the easiest things you will do on your trip.

Hotels are spread over the entire city but most larger hotels are line the National Highway to the Airport, cheap backpacker hostels tend to surround the old market area and stylish boutique hotels a nestled in the trees along Wat Bo Road. Small Khmer run hotels and guest houses, especially in the low season, can be surprisingly good value if you are willing to do a bit of hunting for one that hasn’t been overrun by the guidebook toting hoards.

Accommodations at every price point generally offer hot water showers, cable TV, internet and airport or bus pickup. Some may include free breakfast, though don’t expect much more than an egg on toast and a coffee.

The Temples of Angkor   •   Locations & Activities

Pyramids of Egypt • Luxor • 4 • Getting around

The Kingdom of the Maya • History