Home Archives Pyramids of Egypt • Luxor • 3 • How To Get There

How To Get There

By plane – Luxor International Airport is a destination for flights on several European and Middle Eastern routes, as well as the main southern hub for domestic flights within Egypt.

Internal flights (duration approx. 1 hr) from Cairo to Luxor are maintained by Egyptair and cost about $120 for a return trip ticket.

Direct charters from Europe (London Gatwick, for example) are common in the winter high season. From the airport in Luxor, you will probably take a shuttle provided by your hotel. Note that the Airport in Luxor is very small, and getting luggage off the belt is a challenge.

EgyptAir also arranges day trips from Cairo which is an easy way for those who can stand long days to cover the main attractions of Luxor. Taxis are in abundance everywhere for local transportation.

Visitor visas are available on arrival to many foreign nationals, just after you enter the terminal building. (15$ or equivalent, approximately LE 86, most major foreign currencies accepted.) 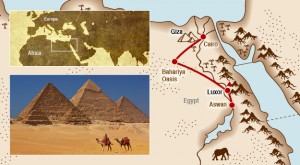 A taxi from the airport into town should cost no more than 50EGP. Do not be fooled by the cartel of taxi drivers outside the doors to the airport. keep walking until you find a taxi driver in his car and then negotiate. Half the people you think are taxi drivers are just touts, so don’t waste your time negotiating.

By train – For those unwilling to purchase an expensive plane ticket, who have more time in which to travel and / or who wish to see more of the country, train travel to Luxor is a great and amazingly inexpensive option.

Four different modes of train travel exist between Ramesses Station Cairo, Luxor and on to Aswan (some trains even start in Alexandria):

Tickets can be arranged through most travel agents in your city of departure for minimal commission. Otherwise, tickets can be purchased directly at Ramesses Station by proceeding through the chaos to Platform 11, where signs will point out the ticket booth. Tickets are best bought a couple of days in advance of travel, although the same day is often enough. The big exception to this rule is Egyptian holidays, when it is best to reserve a ticket at least a week in advance. Weekend travel (Thursday and Friday in Egypt) is the busiest time.

Train tickets have assigned seating to a particular carriage and seat, written in both English and Arabic. Train travel is possible without a prior reservation, but it will add LE 3 to the price of your eventual ticket, and you will not be guaranteed a seat for the long journey.

By bus – Buses leave regularly from behind the Luxor Temple, to most major cities. For connections to Aswan and Cairo, the train is recommended, but it is a good alternative to get to Sinai (via Hurghada–Sharm el Sheik, or over the Suez canal).

By boat – There are boat trips from Luxor to Aswan and also on Lake Nasser to Abu Simbel. These are reportedly the most pleasant and interesting way to get there if you have the time and money. A felucca cruise on the Nile is a great option for those with more time and less money. The train is a close second and much faster.

The Pyramids of Egypt  •  Locations & Activities

Pyramids of Egypt • Luxor • 4 • Getting around

The Kingdom of the Maya • Palenque