Home Archives The Odyssey • Canakkale, Turkey • 2 • How to Get There

The Odyssey • Canakkale, Turkey • 2 • How to Get There

By plane – Turkish Airlines has flights from Istanbul three days a week.

By bus – There are buses from Istanbul at any time, day or night. Just go to Istanbul’s otogar, and look for ‘Canakkale’ signs on the windowpanes of bus company offices. It takes five and a half to six hours to get from Istanbul to Canakkale. The busy Canakkale bus station also has several daily connections with most major Turkish destinations, such as Edirne and Izmir.

Most buses drop their passengers off just next to ferry harbour—which is conveniently located in the city centre—after crossing the Straits by ferry. 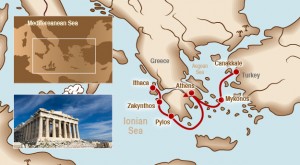 By car – Çanakkale is linked to north, east, and south by well-paved highways numbered E87/E90/D550, E90/D200, and E87/D550 respectively. However, as there is no bridge crossing the Straits of Dardanelles yet, you will have to take either Gelibolu–Lapseki, Gelibolu–Çardak, Eceabat–Çanakkale or Kilitbahir–Çanakkale ferry crossings when arriving from north.

By boat – Of the possibilities to cross the straits, the 24-hr Eceabat–Çanakkale ferry line, with 20-min intervals during busy morning to midnight hours, is likely to be the most convenient choice to get to the city from European mainland.

By car – The site is 2 km off the Çanakkale-Izmir highway (D550/E87). Road signs (saying either Truva, Troya, Troy, or Troia, sometimes two of them on the same signpost) will direct you, starting from the ferry harbour in Çanakkale.

The path through the ruins is well marked, but quite rocky and slippery in places. Be sure to wear proper walking shoes.

The Studios of Pablo Picasso • Cannes • 2 • How to Get There