This adventure trip is based on a mysterious and powerful civilization from the upper Amazon of Peru, the Chachapoyas, whose remnants you will explore in this journey

Discovered in a remote and rugged area of the Amazonian Andes in 1843, seventy years before Machu Picchu was brought to public attention, the colossal ruin known as Kuelap Fortress was built by members of this regional culture. The City of Chachapoyas is the best base for visiting the citadel of Kuelap, the sarcophagi of Karajia and the Mummy Museum of Leymebamba. The mountain scenery is stunning, with deep canyons, cloud forest and waterfalls including Gocta waterfall, the third highest in the world. 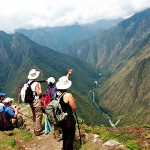 Chachapoyas counts among its principal attractions important archaeological remains, stunning scenery, villages that preserve their indigenous culture, and adrenaline-inducing outdoor adventures and extreme sports, only a few of the reasons why Chachapoyas and the Amazonas region are ideal for a wide range of tourist activities.

Kuelap – It’s legacy includes one of South America’s archaeological wonders – the defensive fortress of Kuelap. Perched on the shoulder of a 10,000-foot mountain, this 9th Century citadel comprises an urban complex of more than 400 stone edifices – homes, palaces and temples enclosed by a 70-foot-tall stone wall. Their architecture demonstrates decidedly non-Inca features, such as protruding geometric patterns, cornices, and friezes. A tropical cloud forest festooned with orchids and steeped in mystery.

The Revash Tombs, the Karajia Sarcophagi and the extensive network of Chachapoyas paved trails also serve as a reminder of the greatness of this vanished nation. Archaeologists just now are mapping and excavating many important Chachapoyas sites. The museum in Leymebamba, which displays 200 mummies recovered from the remote Lake of the Condors, describes the extraordinary embalming methods of the Chachapoya, their lifestyle and culture. The Museum also houses a collection of knotted Quipu, the record-keeping device of the Incas.

For travelers with a profound interest in archaeology and adventure. Also visit the Macro Towers, the traditional Andean towns, La Congona archaeological site, Ventanillas de Otuzco, and in Cajamarca the Inca Baths and Ransom Room of Atahualpa.

The Chachapoyan culture plays a significant role in the archaeological novel Inca Gold by Clive Cussler. The opening scene of the adventure film Raiders of the Lost Ark involves a fictionalised Chachapoyan temple, which Indiana Jones explores in order to find a distinctive Golden Idol, uncovering many deadly traps along the way.

Below are links to more travel information such as locations, what to see and do, activities, how to get there, and a history of the myth and legend. Use custom search engine to find your bookings.

The Chachapoyas of Peru   •   Locations & Activities

Hikers In Peru Noticed Something Strange Hidden Away On This Cliff Face. http://t.co/cIAoFu6AmN #adventure #travel #photography

Pirates of the Caribbean • Bahamas & Jamaica

The Kingdom of the Maya • Mexico