Pirates of the Caribbean • Jamaica • 3 • How to Get There

Arriving by air – Norman Manley International Airport. Located in the southeastern part of the island, overlooking Kingston Harbour on the Palisadoes peninsula. Served by Air Canada, Air Jamaica, British Airways, Virgin Atlantic, Delta, and a number of Caribbean airlines. Be prepared for queues at the airport, to clear both immigration and customs, which are fairly strict. It is important that you know where you will be staying and write it down on your immigration form.

There are taxi vans between the airport and town – one person US$28; a group $33, potentially negotiable. Payment can be in US$. The cheapest way is to take bus 98 straight to the Parade in downtown Kingston for J$80. The bus stop outside the arrivals terminal is for bus 98 going towards Port Royal. Just passed the bus stop is where bus 98 stops on its way to downtown. 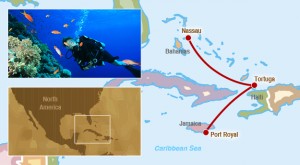 Kingston Tinson Pen There is a smaller airport closer to downtown. It only receives flights from Montego Bay on 14-seater planes on Jamaica Air Shuttle.

By car – Island Rental Cars has offices at the NMIA airport, in downtown Kingston, Ocho Rios and Montego Bay, and will allow you to do one-way rentals. Remember to drive on the left!

By bus – Kingston has an extensive and modern bus system. The Jamaica Urban Transit Company (JUTC) runs the bus system for the government, while private contractors also run the same routes. There are also minibuses and route taxis which are very affordable. Whenever in doubt, ask a bus driver how to get somewhere or where to find a certain bus; they are generally very helpful.

By taxi – All official taxis have red license plates that start with PPV.

Route Taxis (a taxi that has a set route and picks up multiple people along it) are also common and often mirror bus routes and are not much more expensive than buses. These are a bit more complicated to get used to, so ask for help.

Charter Taxis (normal taxis) – negotiate a price before getting in the car. Fares range from J$400 to J$5000 for long routes.

Rental cars – With some practice, bravery, and chutzpah you can rent a car (Island Rent a car allows for one-way car rental). Take a good map and be willing to ask (and keep asking to get a consensus) for directions along the way. It’s not safe to drive in the countryside after dark. If you get in a wreck/hit someone, drive to the nearest police station.

Pirates of the Caribbean   •  Locations & Activities

Pirates of the Caribbean • History • 2

The Kingdom of the Maya • Cancun