Legend of King Arthur • Glastonbury • 3 • How to get there

A persistent myth of more modern origin is that of the Glastonbury Zodiac, an astrological zodiac of gargantuan proportions said to have been carved into the land along ancient hedgerows and trackways. The theory was first put forward in 1927 by Katherine Maltwood, an artist with an interest in the occult, who thought the zodiac was constructed approximately 5,000 years ago.

Christopher Hodapp asserts in his book The Templar Code For Dummies that Glastonbury Tor is one of the possible locations of the Holy Grail. This is because it is close to the location of the monastery that housed the Nanteos Cup.

Another speculation is that the Tor was reshaped into a spiral maze for use in religious ritual, incorporating the myth that the Tor was the location of the underworld king’s spiral castle.

Glastonbury Festival – this festival is held annually at the end of June and is famous for its wide range of headlining music acts ranging from rock to opera.

To buy – A selection of crystals, semi precious stones, incense and esoteric books are available. Most shops on the high street are not chain stores; therefore, you care guaranteed to find an unusual item. An abundance of witchcraft, pagan and goddess shops will confront you, and it’s worth taking a look at at least one of them on your visit here. Of particular note is the new Gauntlet Thoroughfare, opened last year, which contains a plethora of specialist shops, at 11 High Street.

How to get there 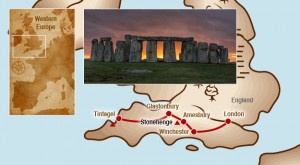 You can take busses from Wells or other major cities in the area to get to Glastonbury. A National Express coach leaves the High Street early in the morning, and one returns at night to get you to London and back, or you could get a Megabus or train to Bristol and then get the 376 local service to Glastonbury (1.5 h).

Accomodations – Although there is now a new Travelodge just out of town, your best bet is one of the numerous bed and breafasts, ranging in price and quality markedly. There are 34 other bed and breakfast establishments in Glastonbury and it is best to look for the ones that are rated 4 star.

The Kingdom of the Maya • Tikal

The Kingdom of the Maya • Palenque

The Studios of Pablo Picasso • Barcelona